Now the drugs don’t work, they just make you worse.....


My top news story of the week comes from The Daily Mail:

I have a lot of respect for the daily Mail when they talk about health. Their comments section is frequented by a vitriolic bunch of smug creeps who abhor any notion that the Great British public might want advice about anything and seem to think that the Laissez-faire life that brought some of them riches in the 90’s should be prescribed for healthcare as well.  All the more impressive that The Daily Mail perseveres.

In The BMJ this week we have an interesting article from Dr Simon Tobin and Dr David Unwin; you may recall my post last year on Dr Unwin’s successful LCHF intervention trial in which Diabetes patients lost weight and lowered their dependency on drugs by adopting a LCHF diet.  This week’s report describes how a question from a patient about how to reduce the growing list of drugs he was taking provided an opportunity to step back and look at the  ineffectiveness of the drugs generally being prescribed for the symptoms of metabolic syndrome. The lesson learned appears to be that the drugs being prescribed are not very efficient at dealing with most patient’s problems; mostly because they have been prescribed to combat the assumed general risk of heart disease rather than a specific ailment. The other big lesson is that weight control is the real key to managing all of the symptoms of metabolic syndrome. This seems to be the common message from all health practitioners promoting the LCHF diet; eat real food, remove processed food and particularly refined carbohydrates from your diet and you will lose weight and lose your dependence on drugs

In my own family the question of over-medication  is often a heated one. A relative was recently on 7 separate medicines to combat thin blood, raised cholesterol, hypertention, anxiety and other complications; there was no noticeable improvement in any of her ailments but there was a marked increase in her lethargy, loss of mental acuity and physical ability. None of the drugs that she had been prescribed had ever been tested in conjunction with each other. It was my strong conviction that, much like a teenager spaced out on alcohol, nicotine, paracetamol, red-bull, no sleep and perhaps a little cannabis or crystal meth might not be expected to rise at 10 a.m. and complete the Times crossword over breakfast, my relative was unable to function normally for 7 days a week because of the cocktail of drugs that she was taking. And this is not an unusual situation for a woman of 80.   This subject came its natural conclusion when we all listened to this. 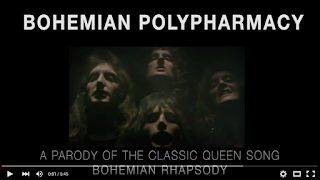 My own mother on the other hand refuses to take any drug unless it can be proved to be effective; and as she was a statistics lecturer for 30 years and the proof of effectiveness of any drug is at best an elusive thing, this is a very rare event indeed.  Long may her drug-free rhapsody continue!