It's All In The Taper

I was fit and excited and the Brighton Marathon was only 3 weeks away. I’d done every training run but one. Almost everything had gone to plan. I hoped to run under 3:20 and get a good for age place in next year’s London Marathon.

But here’s the thing. I was in exactly this place last year; and the year before that. Both times at the last minute I picked up an injury and I’d had to pull out. It’s now been three years since I last ran a road race!

And right on cue disaster struck! The day before my last long training run, just walking down stairs at home something went wrong in my left calf. I’d say I strained it but I was only walking down the stairs. I call myself a marathon runner and here I was again on the sidelines. I put it down to my sedentary job; I sit at my desk all day and my legs and back stiffen up. This is not healthy!

Out of necessity I’ve learned to be more prudent with my planning and my running. If a run is going well I back off; if I am getting ahead of the plan I take a day off or do a Bulletproof  strength session instead. My weekly average milage is still in the 20s; but then I am getting older and things have to change.  The bulletproof sessions have made me feel stronger, and perhaps been the key to where I was 3 weeks ago, fit and ready to run long. There have been no Strava records this year, instead I have a new mantra – “Less is more, slow down!”. 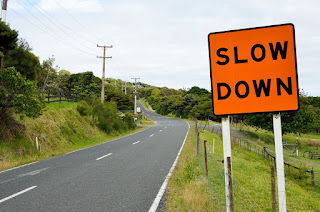 I’d slowed down now, that’s for sure. On the Saturday I couldn’t run and I baled from my last long training run. On the Sunday I could walk comfortably but not run.  On the Monday I could walk comfortably but not run. But then I figured something out: the damage couldn’t be that bad as it was so innocuous. What if it’s just another nerve spasm? I have a 6-year history of compressed nerves kicking off referred pain in my legs.  There was a small knot in my calf sometimes but it went away in a hot bath. Why not try to warm it up some more and see how it behaves. So off I went to the gym and spent 10 minutes on a cross trainer which doesn’t apply any eccentric force on the calf but warmed it up nicely. That went well so I tried a light jog on the treadmill, and it worked! 30 minutes and 3 light jog sessions later it was still going. My mood went from miserable to very excited in those 30 minutes. There were nearly 3 weeks to go and I could still do it. No more speed work, just one long run, some light recuperation over the next 2 weeks and 1 target paced run 4 days out and I could still be in with a good chance.

So 5 days later I ran a last long run. 18 easy miles. And sure as eggs are eggs my right calf did the same thing just as I got home. Time to brew a cup of tea and think things through!

We then spent a week skiing. Luckily there was a gym at the sports center in Tignes and I visited twice. Each time I could feel the problem but with care and a long warm-up I was able to knock out a few miles. It started to become clear that the problem had to be with my back.

So after we got home I booked a session with my physio who found the problem right away, gave me some treatment, reminded me what to do to help it recover and sent me packing.

The next 3 days were horrible. 3 times a day I’d ice my back, do some spine twisting and then some "nerve flossing" and then some heat treatment. At first I could run well, then the problem got worse and included a light pain in my hamstring, and then last Friday I was able to run pain free again.  Just 2 days to go!

Do I run, or not run? Is it too risky? How would I feel if I didn’t try? It was Jane asking that last question that tipped the balance.

I’d more-or-less given up on my target time. Normally it’s the last 2 weeks when I focus on running at marathon target pace for several runs to get used to it.  I decided to just focus on enjoying it as much as I could; not to worry if I had to pull out, after all I was fit and I’d be running again soon. There are lots of great events to aim for over the summer.

I had a target of 3:20. That’s exactly the time I got 3 years ago; I didn’t train very hard that year but I hadn’t been injured either. Back in December I’d I figured that if I could just train for four months and not get injured then my natural speed and experience should get me to the finish line on time. Now what? Do I abandon that plan, and with it my hopes of a "good for age" entry into next year’s London Marathon? Common sense said "yes; don’t risk it, just enjoy the run".  So that’s what I set out to do on Sunday morning.

Before the start my left hamstring was hurting a little. This is the site of the original referred pain injury that put me out of the Brighton Marathon 6 years ago. I was gunning for a sub-3 marathon after training very hard for six months; all the signs were positive and then it all feel apart. I was a complete mess for some time after that.

If you saw me at the start on Sunday you would have seen a pretty despondent chap, moping about and ready to give up and walk home. My warm-up had no effect on my leg and I’d have rather been at home tucked up in bed. Not exactly “loving it”.

Then I bumped into an old running club mate and he cheered me up a bit; Mark is a 3-hour runner but said he was aiming for 3:30 and I thought I’ll try to keep him in sight. And I remembered that there were plenty of folks having a much rougher time than me that morning so it was time for me to man-up and get on with it.

For the first 3 miles the hamstring continued to ache, but it didn’t get worse. Then in the center of the city it started to fade away and soon it was gone; to be replaced by…. nothing! No pain anywhere. And that’s how things remained for the next 3 hours.  I couldn’t believe my luck after the problems I’ve had over the last year.  Brighton suddenly seemed full of happy people calling out my name (it was on my shirt for the first time) and the support I received from friends and strangers lifted my hugely.

For the first time in over a year I remembered my great love of running. After a slowish start I felt great, I began to think about my target time and gradually increased my pace until I was about 10 seconds per mile under that target. By mile 7 I knew that I could keep that pace going and I stayed there for the next 13 miles.  Mile after mile of controlled running, passing runners steadily with very few people overtaking me.


That’s just how I love to run.  So long as no injury came I knew I could do it.  There was no wall, just the likelihood of some pain in the last few miles as normal. My strength training did wonders and I could feel my form holding on for longer. Perhaps I could have pushed harder and gone a few minutes quicker, but perhaps not; I had planned to run at exactly this pace and there was no reason to go any faster, I just had to beat my target.

As for the LCHF diet, I was running high(ish) after training low. Just a few slices of bread and some potatoes the day before and energy drinks before and during the race. This strategy worked well for 15 hours back in October and I wanted to try it in a marathon. I probably only had about a quarter of  a liter of energy drink and a half of water during the race.  I was sure that this last minute glucose-fest would not interfere with my long-term adaptation to running on fat.   My energy levels were still high at the end although there were signs of oncoming cramps in the last 2 miles.

I was unnerved at 22 miles when the mile markers were not agreeing with the beeping of my watch; they came about 90 seconds later. That 90 seconds was my cushion and I thought I’d lost it. Should I speed up? That would be courting disaster, so I trusted the watch, it couldn’t be that far wrong.

Hove seafront has seldom looked so long! I focused on form and looked out for obstacles; smooth running with no sudden changes to trigger a cramp that could set me back a few seconds. Then we hit the 40K timing mats and I had just over 10 minutes to go. Perfect.  I passed Jane and our friends and they were screaming; they knew I was close. “Just keep going” always sounds like such a stupid thing to say but that is all I needed to do now.

I enjoyed the last quarter-mile immensely. It takes 2 minutes to get to the finish from the Palace Pier and I had 3. Several folks from my running club were marshaling the finish straight and there were smiles and high-fives with no need to race for the line. I finished in 3:18:40, inside the London marathon V50 Good For Age target time of 3:20.  My pacing had gone perfectly and my times for both halves of the race were exactly the same.
Beating that time was a huge relief to me. Despite a taper of troubles I’d finished my first road race for 3 years and I’d achieved what I’d set out to achieve. I was a half-decent marathon runner again! Certainly not my fastest time but after a year of not racing I was back up where I belonged.

The next day they lowered the good for age entry time for the London Marathon down from 3:20 to 3:15.

At first I felt cheated. Gutted is a great description of how you feel when something you have worked so hard for is taken away. But after 24 hour’s reflection it doesn’t seem so bad now. I hit my target and that’s a big deal for me; the fact that the goalposts were moved while I was running is not something I can control. Far worse things have happened to people very close to me recently and I should be proud of what I have done, not upset about the future.