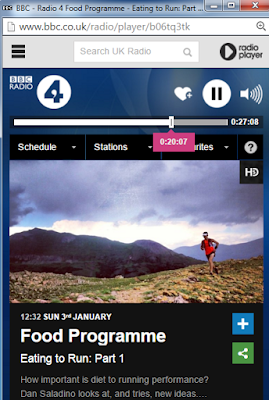 Last month the Food Programme on Radio 4 ran a 2-part series entitled Eating to Run. Naturally I was intrigued and listened in. The program covered a wide range of topics with a focus on how the food we eat can impact on our performance.
Lots of people advocating hugely different diets. And loads of contrasts; the scientists from Loughborough insist that you need to burn carbs and you need to recover quickly with a protein and carb drink; and the Kenyans (who happen to be rather better than the British) who eat nothing at all after a long training run. Brendan foster replenished his body with a couple of pints of shandy!

And the conclusions that I come to are these:

Eat whatever works for you and your body, but make sure you are not harming actually yourself.

I believe that a lifetime of high carbohydrate food is likely to contribute to bad health, especially if you are intolerant to carbs as many people undoubtedly are.

I also believe that most of the science described by sport nutritionists and quoted by Lucozade is aimed solely at elite athletes.  And as Charlie Spedding puts it so well in his biography entitled Last to First: "Why is it that most of that fastest British marathon runners in the last 40 years were running over 20 years ago?"  (In 1984, for instance, 2hr 15min was broken 25 times by British athletes. In 2012 it happened on just three occasions).  Something is not right here.

The notion that we must run on carbs in order to be champions relates to a tiny fraction of runners; and except for sprinters the rest of us could certainly run just as well on fat if we chose to and would be best off considering what energy source is more healthy. And the answer to this would appear to be to “Eat Real Food, mostly vegetables and not too much”.