Can I run as fast on fat as on carbs? 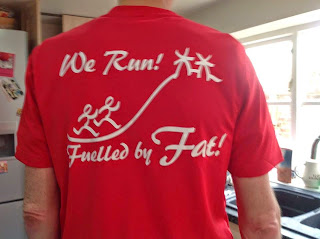 I was watching the diamond league athletics on the telly last night and wondering, could I still run 400 meters in under a minute? When I was a boy I had a PB of 55 seconds. And 4 years ago pre-LCHF I clocked 62 seconds after an ill-advised bet with with my son; could I still get anywhere close to that?

The stock answer to the question "Can I run as fast on fat as on carbs" tends to be that the fastest runners are all fuelled primarily by glycogen, not fat. This may be true, particularly as they all tend to be young and insulin-sensitive; they are suited to running fast on carbs. Most of us are neither of these.

But where is the line between carb-speed and fat-speed? According to Tim Noakes this line is probably only a few minutes back from the leaders of a Marathon, or a few seconds for a 10K.

And so the number of people for who the stock answer applies is actually tiny. Look at the details of elite low-carb runners and you will see that they run sub-2:30 marathons and 30 minute 10ks. How many people do you know who can do that?

What I hope I have proved on this blog is that for everybody else it is possible to train ourselves to run just as fat on fat as we could on carbs. See this post for lots more detail on how we can train our bodies to run fast on fat.

Perhaps there is a competitive advantage to the shorter, faster races from burning carbs, but again, how many people does this apply to? Unless you are a track running member of an athletics club or still at school then it is very unlikely that you will ever run a fast 400 meter or mile race again (I'd put the parents race on sports day in a separate category here!). In which case this advantage is of no consequence, you could run just as fast on fat as you could on carbs.

And so the big question should really be, why would I want to run on fat?

Well my answer to this question comes in two parts:
And as for the standing quarter in under a minute. I am confident that I'll do this down at the track one evening this autumn.
Posted by LCHF a Runner's Guide at 12:25 6 comments: