The Tank Tracks - Fuelled by Fat

About 2 miles from my home is a rather odd path up a hill with no name. There’s a grand view from the top. Locals refer to this path as The Tank Tracks. This is a reference to the fact that it was created and graded by the army during the second world war.

The path runs for one kilometre in a mostly straight line up an even sloped hill. The grading is largely crumbled away now but most of the path is still firm all year round and this makes it the easiest local path by which to ascend to the ridge of the South Downs.

Perhaps it is the quirky name, or possibly its ease of use but this path has become an attraction for runners near and far.  Local running groups meet at the bottom or jog out from the nearby villages of Hassocks, Keymer and Ditchling and use it for a lung-busting hill climb. The route is especially popular with the local group "We Run! Hassocks" and many local runners have experienced their first proper hill run here.

It can take a novice 10 to 15 minutes to climb the 130 vertical meters from the gate at the bottom to the signpost at the top. Elite runners have been attracted to the route as well; the current record of 5 minutes and 6 seconds is held by Maximilian Nicholls from Tonbridge Athletics Club who also holds Strava records for climbing Snowdon!

Before I took up hill running I used to stand on the platform at Hassocks Station and look up at the local hills and think “I should be able to run up there”. You can see the line taken by the Tank Tracks from the platform.  So I took up running and sure enough after a few weeks I was running up there. And I have been running up there for 12 years now and I’ve probably run this path over 100 times since then. It was particularly useful in the winters of 2008 and 2011 when I was training for the
3 Peaks Fell Run as it allowed me to build up my stamina for mountain running no matter what the state of the countryside. I put down a respectable PB of 7:10 back then.

There are nicer paths by which to reach the South Downs Way, and there are certainly harder ones; the best is probably the path from Clayton Rec to Jack and Jill Windmills, and the hardest is probably the direct route up Ditchling Beacon from the lower car park. However the great appeal of the Tank Tracks is its reliability in all seasons. I’ve run up there in deep snow, in the dark, in torrential rain and in a howling gale and I’ve never had a trip or fall.  This means that it can be used as a marker of how fit you are. Run up the path as fast as you can and compare it to your best, or your worst, or your average.  Many folks are not the least bit concerned by such things and that is fine, but I often am. When considering a target time for a hilly race I will always have a run up the Tank Tracks to judge how strong I am. 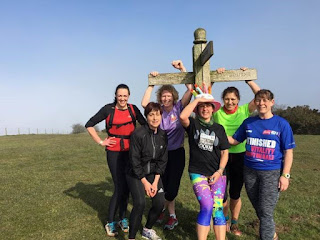 I have lost count of the number of times that friends have exclaimed about the wonderful view from the top of the hill by the signpost. You can see for 40 miles in most directions on a good day. It reveals just how wonderful our local countryside is, and it’s only 2 miles from home.

I am certainly not one of the fastest up the Tank Tracks. In fact I am nearly 2 minutes slower than the record holder. But I might have one claim to Tank Tracks fame; I think I might be the only person to have run it twelve times in one morning, and I am sure that I’m the only one to have done this on a zero carb diet.. 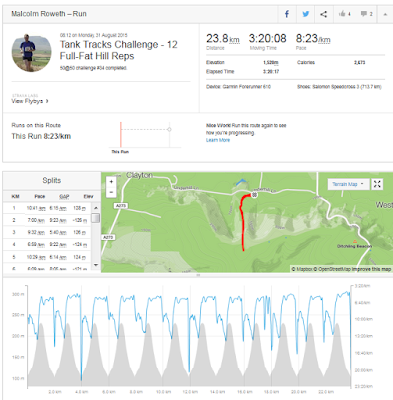 And lastly, having mentioned the diet, I am very pleased to say that last week I beat my PB on the Tank Tracks; for good measure I did it on another local hill as well this week.

Lots of fitness experts suggest that it is not possible to perform at your best in short distance threshold training or racing when burning fat rather than carbs. I like to think when it comes to 2nd rate runners like myself, I may have proved them wrong.