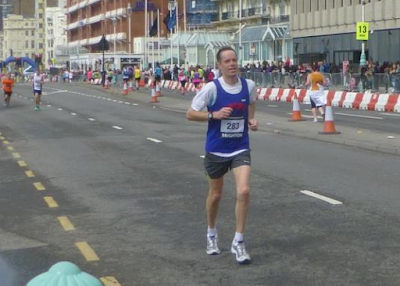 As I mentioned previously my key goal for this spring was a 5K PB. There has been much criticism of the low carb high fat diet and the supposed lack of energy that it provides for high intensity performance. I was particularly interested in implied criticism from Joe Pavey in April's Runners World where she said that the diet would not support the energy requirements of high intensity work. This opinion contradicts the evidence from the FASTER study that I described in my post LCHF How Fast Can We Go? This study and the film RUN ON FAT demonstrate how improved fat-adaptation over time allows us to oxidise (or burn) higher rates of fat than previously thought possible, to the point where fat-adapted runners can train and compete at very high intensities.

After a year on the diet I felt that I was certainly able to train just as hard as ever before and so I targeted a 5K PB as a means of demonstrating this.

In February things were going well and I got down to 30 seconds away from my PB. I was not in a hurry so things were looking good. But then two things happened; I picked up a minor injury that set me back a couple of weeks, and Marathon fever set in! I just love marathon running. Without much distance training I threw myself into our local charity marathon in March and ran a really strong second half, and so I committed to Brighton Marathon hoping to do something new – to run a decent pace marathon and to enjoy all of it. When you’re running for a PB you are on the edge the whole time, and it’s hard work with little time to soak up the fantastic atmosphere that Brighton provides every year.

The diet has settled into a easy pattern and now presents no problems for planning or executing a 3-4 hour run. There is no pre-race build-up, I just wake, have my normal breakfast and then run. On longer runs I take on some water and if it’s hot I take on some salt.In fact the only preparation I tend to do is remove almost all carbs from my diet (apart from a few in some vegetables) for the 48 hours before the run so that I can justifiably claim to be running on almost nothing but fat.

So with no apprehension at all I set off gently for the first few miles, enjoying the occasion with my friends Marina and Adrian, both low-carb advocates who ran PBs that day. Looking out for family and friends along the way and soaking up the spring sunshine. The atmosphere was indeed fantastic and I was able to chat with strangers and soak it all in without worrying about split times for once.  I started to pick up the pace after an hour and coming through halfway at 1:43 I felt strong and just knew that I had it in me for a decent second half. In 2013 I recall a grimace that was on my face for most of the run but this year it was replaced by a smile. The weather was kinder with no troubling headwinds and the heat was less than before too.

A negative split is great for several reasons; the best of which I think is the way that the second half of the race is constantly punctuated by overtaking tiring runners. I have to admit that this is a great feeling for me, it provides motivation in spades as your legs start to tire.

The last 8 miles were agony in 2013 and I have no desire to repeat that hour of pain again unless I have a good chance of a PB. This year it was like running a fresh Brighton 10K. I loved it. Still loaded with energy my only concern was to avoid injury from overenthusiastic racing. So I settled into a comfortable cruise along the seafront and had the most enjoyable finish to any race I have ever run.

I ran 1:37 for the second half finishing in 3:20 on the back of just 3 10-mile-plus training runs this year. Yes I have a lot of experience to fall back on when it comes to this kind of thing but I have no doubt that it is LCHF fuelling that enables me to run so strongly over the latter stages of a long run.

Now it’s May and I’ve been getting steadily faster again at Parkrun. I'm up to 44 of them now so well ahead of the curve with 5 months to go to complete my challenge of 50 Parkruns before I am 50. There is a Parkrun by the Golden Gate Bridge that I hope to do when we are there in August.  In the next 10 days I have two big distance events coming up; the Discovery Run Half and the South Downs Way Relay. But by mid-June I will be looking at that 5K PB again.