FAT is BACK - Let's Spread the News 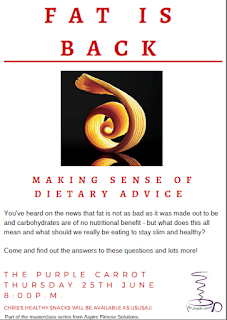 This week a work colleague who I had only met in person once before took me aside during a visit to Amsterdam and talked me through how he had listened to the LCHF message I gave at a dinner 4 months ago. After the dinner on his own he researched the subject and despite pleading from his mother and doctor back home in India he decided to try the diet. In the first 7 weeks he has lost 7 kilos.

This may not seem like much at first but to him it is a miracle. As an overweight early middle-aged man with high blood pressure and ‘high’ cholesterol, taking statins and previously unable to shift weight he now feels happier, more energised and crucially, less hungry all the time. I have rarely met someone so elated. He has the evidence to show his family back home that the diet is working and he can now see the way out of the struggle that he has been facing for years.  I was so happy to have played a small part in his change in fortunes.

Both CNN and Forbes have been highlighting the FAT is BACK message this week . Coincidentally this is the same as the title of the presentation that Jane and I gave for the first time this week. It was a small audience of invited guests but the talk went down well and we hope to be taking it to larger audiences soon.

The key message in the news and in our talk is that fat is no longer the enemy. This is a hard message to deliver when faced with a lifetime of indoctrination. The NHS still advocates a low-fat diet to lower total cholesterol and improve the risk of heart disease, despite growing evidence showing that the relationship between cholesterol and heart disease lies elsewhere. Doctors, family and friends can all be baffled and warn against increased intake of dietary fat.

How will we change such ingrained attitudes? The only solution to this is education.  So we will continue to deliver our talks and perhaps bore a few people over dinner.

Email ThisBlogThis!Share to TwitterShare to FacebookShare to Pinterest
Labels: fat is back